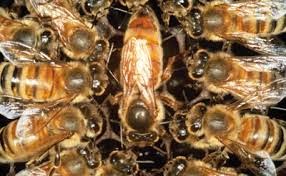 One Degree of Change #21

It is a Bee-utiful morning!  We headed for the hives.  We have new queens and we split the hives to create more future honey.  So this was my job on Sunday morning.  We drove out to the orange groves which are almost all white with blooms and the scent is intoxicating. The air is thick with honeybees as I open  a hive in the honey bee yard near Weirsdale, Florida. The guard bees bump against my veil, which lets me know they are doing their job. But we’re in search of the queen on this crisp spring morning.  It’s 8:30 am and the honey bees are already flying in pollen to the hives. I’m outfitted in my stunning bee suit and sexy safari hat with veil. I light the smoker filled with pine needles and sawdust pellets.  I squeeze the bellows to puff some smoke along the hive landing board. The smoke calms the honey bees so we can work them more easily. I direct more smoke under the cover as we lift it to reveal the colony, humming with activity.  We’re looking for the queen. I loosen the sticky frames with a metal hive tool and lift them out one by one for inspection. Myriad bees cover the frames, heavy with nectar in six-sided wax cells. “There she is,” I rejoice, pointing to a blanket of bees crawling on top of one another.

We purchased queens to create new hives.  Once we locate the queen we take a couple of the bee filled frames and add them to a mini hive called a nook.  The queen is introduced into that hive via a little plastic cage with an opening filled with a sugar plug.  She eats her way out in a couple of days, releasing her pheromones during the process which allows the relocated bees time to accept her as their queen.  She makes babies, the other bees make honey to feed her.  And me too!  Yes, that is sugar, but of the best kind.  But, I have a rule that I follow to watch my sugar intake.  Here it is:

One Degree of Change #21: Eat Twice As Many Veggies Than Fruit!

What???  Our diets are so sugar laden already.  As we try to make changes, we eat more fresh fruit, because we think we are doing the right thing.  So we have a smoothie in the morning with a banana and blueberries.  Snack on an apple before lunch.  Eat a fruit salad for lunch.  Eat a whole bunch of grapes through out the afternoon. Then after dinner have a large bowl full of prunes as a bed time snack.  That sugar adds up and can make the difference between not losing weight, increasing your cholesterol and/or shooting your blood glucose though the roof! Yes, fruit is good for you but not in major quantities.

Here’s how the rule works. First, let’s look at a list of fruits that are lower in the glycemic index. 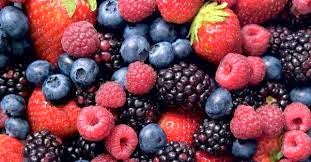 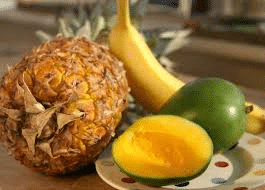 Next, when you are preparing your meals for the day for every serving of fruit, you must have two servings of vegetables.  A serving size would be one cup. I’m not saying that you can’t have fruit or that it is not good for you.  I’m saying that it has sugar in it.  We should only have 10-12 teaspoons of sugar per day in order to limit our added sugar intake to 10%.  The average American consumes 22-24 teaspoons of added sugar per day! That is 88 grams of sugar!  So if you are eating a ton of fruit in your day, then it will still equal sugar in your total caloric intake. Select the fruits from the list above that are lower in the glycemic index (means less sugar).

If you look back at the One Degree of Change #8, I gave you a veggie per month to try. April is Collard greens.  Your mission is to create a unique way to prepare them.  Here’s a twist on how we make sautéed spinach, substituting collard greens instead! 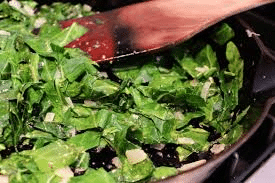 Empty the Easter baskets. Clean out that pantry or junk food cabinet.  Calculate how much sugar you eat in a day and cut that in half.  Eat twice as many veggies as fruit, it is just that simple!  If you want to eat two heads of broccoli, go right ahead.  It will fill your belly and give you an amazing amount of nutrition rich and fiber dense food.

Keep up the great work!  And guess what? The baby ducks have hatched.  Jump day is near!!!!

Go ahead, make that One Degree of Change today!